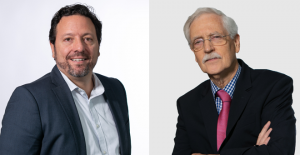 Promising new research by Christian Mueller, PhD, and Robert H. Brown Jr., DPhil, MD, provides evidence that a therapy using synthetic microRNAs may safely treat patients with amyotrophic lateral sclerosis (ALS). The study, appearing in Science Translational Medicine, shows that a gene therapy delivered to motor neurons via a viral vector was able to silence SOD1 protein, mutations of which are linked to ALS, without causing any adverse effects.

“The beauty of this study is that we were able to achieve silencing of the SOD1 protein by more than 90 percent in some motor neurons,” said Dr. Mueller, associate professor of pediatrics. “This level of silencing, coupled with the lack of adverse effects, suggests that this approach to treating ALS should be safe in humans and also that therapy can potentially be done with a one-time treatment.”

ALS, also known as Lou Gehrig’s disease, is a progressive, neurodegenerative disorder affecting the motor neurons in the central nervous system. An estimated 6,000 people in the Unites States are diagnosed with the disease each year. As motor neurons die, the brain’s ability to send signals to the body’s muscles is compromised, leading to the loss of voluntary and involuntary muscle movement, paralysis and eventually death from respiratory failure. The average survival rate for patients with ALS is three to five years. In 1993, a team of researchers led by Dr. Brown, the Leo P. and Theresa M. LaChance Chair in Medical Research, professor of neurology and director of the Program in Neurotherapeutics, discovered the first gene linked to familial ALS, a protein anti-oxidant known as superoxide dismutase, or SOD1. Only 10 percent of ALS cases are familial, while roughly 90 percent are sporadic in nature—meaning there is no identifiable familial risk or family history.

Gain-of-function mutations to the SOD1 gene, such as those targeted in the experiment described in this publication, account for 20 percent of all inherited cases of ALS, while misfolding of the SOD1 protein has also been identified in other so-called “sporadic” cases of ALS, making it a likely target for therapy. A potential therapy for these cases is to suppress the expression of mutant genes or reduce the amount of misfolded protein. The belief is that by doing so, the neurotoxicity that causes motor neuron death may be avoided or possibly reversed. One approach to targeting these genes uses microRNAs.

MicroRNAs are part of the natural RNA silencing machinery found in plants and animals. These small, noncoding RNAs pair to complementary sequences found on messenger RNA and destabilize them so the cell can’t turn these molecules into proteins. Using this cell machinery, scientists believe they can effectively “turn off” toxic genes and proteins that cause disease.

More than 180 different mutations to the SOD1 gene has been linked to ALS. To account for all these disease-causing variations, scientists in the Mueller lab identified commonalities in the DNA sequences of these various mutations. This allowed them to take an approach to the composition of their drug using RNA sequences capable of targeting as many of the different SOD1 mutations as possible. “Otherwise, each unique mutation sequence would require its own drug to silence,” said Mueller. “This approach allows us to target the vast majority of the patients with an SOD1 mutation using a single drug.”

Delivering the drug through the spinal fluid showed that the adeno-associated virus was able to express its cargo throughout the length of the motor neurons, which can be up to three feet long, from the muscle, up the spinal column to the brain. Once delivered, these viruses deployed their RNAi therapeutic and reduced SOD1 protein production in the motor neurons by as much as 93 percent. Mueller and colleagues also showed that the miRNA drug didn’t cause liver toxicity and the viral delivery vector elicited no immune reaction. Similarly, off-target silencing of genes with similar sequences, often a concern with many gene therapy techniques, was not detected.

“What this shows is that we have a great way of delivering an RNAi-based drug to the right cells, in sufficient quantities that we should be able to silence the disease-causing gene with a one-time treatment,” said Mueller. “These experiments are at a point where they need to be taken to the next step and translated into clinical trials for patients.”

I am pleased to provide an update on our ALS clinical trial activity, which has been so generously supported through by the Angel Fund.  The focus has been on a new and innovative program to use gene therapy in treating a particular form of hereditary ALS associated with the mutant SOD1 gene.  More recently, we now have developed a different – but similar – modality for treating ALS associated with the mutant C9 gene.   With over 40 identified genes associated with ALS, the SOD1 and C9 forms together represent approximately 65% of all genetic ALS. As you may know, last summer we treated a single ALS patient on a compassionate use basis using a new gene therapy approach aimed at silencing the SOD1 gene, from which we have learned a great deal.  The results from that first patient have now embolden us to treat a second patient, also on a compassionate use basis, which we hope will happen soon. The first patient was treated at UMass Memorial Medical Center in Worcester; this second patient will be treated in Boston at Mass General Hospital under the care of my longtime collaborator, Dr. Merit Cudkowicz.  We have evolved the protocol for the second patient based on what we learned from the first, providing us with high hopes and expectations for further success.  If we do see strong progress with the second patient, that hopefully will trigger a plan to launch an expanded access, Phase I trial that will treat approximately 10 additional patients. I also am pleased to announce a new partnership with a biotech start-up, called Apic Bio, a novel gene therapy company that was spun-out of UMass Medical School.  Together with your generous support, Apic will help finance this compassionate use trial and help us evolve this work into the expanded access, Phase I trial.   Having an industry partner like Apic allows us to leverage your generosity and accelerate our work with high expectations for success at the clinical-trial-stage. I also am pleased to report that in addition to our promising SOD1 work, we continue  our efforts to bring new therapies to clinical trial targeting the C9 gene as well.  Our work on C9 has been of particular interest and focus for the Angel Fund, for which we are so grateful.  We are moving forward with our C9 initiative on a dual pronged approach.  First, we are using our own, in-house antisense technology to silence the mutant C9 gene.  Second, we are fortunate to have partnered with a Cambridge based biotech company, called Wave Life Sciences, to help them develop a novel type of product that also silences the C9 gene. The past twelve months have proven to be an inflection point in my more than 30 years of studying ALS.  Entering into these human clinical trials with innovative and promising new therapies represents the culmination of a lot of hard work by a talented and dedicated team at UMass Medical School and the Mass General Hospital.  While we still have so much more work to do and many more miles to travel, I never have been more optimistic about the possibility of effectively treating genetic ALS – and eventually all forms of ALS. May , 2018 Finding a Treatment for ALS — Will Gene Editing Cut It? Ammar Al‑Chalabi, F.R.C.P., Ph.D., and Robert H. Brown, Jr., M.D., D.Phil

A key challenge in human medical genetics is developing the ability to suppress the expression of mutant genes that cause diseases that are transmitted as dominant traits. This is particularly true for the neurodegenerative disorders; many such disorders have dominantly inherited genetic forms and are not reversible with current therapies. One example is amyotrophic lateral sclerosis (ALS): approximately 15% of cases can currently be attributed to dominant, high-penetrance gene variants,1 and many more ALS-causing genes probably remain to be discovered.

Radicava (edaravone) has been approved by the FDA and will be available to treat ALS patients. MT Pharma America has been granted to begin marketing edaravone as a treatment for ALS. This is the first ALS treatment to be approved since 1995!!
FDA approves drug to treat ALS