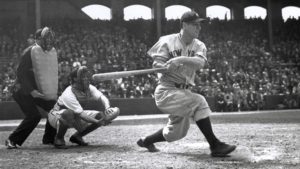 Amyotrophic Lateral Sclerosis (ALS) is sometimes known as Lou Gehrig’s Disease after the baseball great who died of it in 1942. Gehrig’s celebrity status generated some public awareness about this relatively obscure but devastating disease.

ALS is a progressive and ultimately fatal neurological disease that attacks the motor neurons in the brain, brain stem and spinal cord. The resulting motor neuron loss causes increasingly debilitating paralysis as the muscles of the body waste away. Death comes when victims lose critical functions such as the ability to swallow and ultimately, to breathe.

ALS is particularly insidious because the intellect remains intact throughout the course of the disease. Victims are cruelly aware of their fate as they gradually lose the ability to control their muscles, to communicate, and eventually to breathe.

An estimated 30,000 Americans, alive and apparently well today, will die from ALS. ALS can strike anyone—of any age, ethnic origin or gender. Approximately 90% of cases appear sporadic, while 5-10% of cases are familial, occurring more than once in a family. ALS typically appears in middle age and most victims die within two to five years of the onset.

The cause of ALS is unknown. There is no known effective preventative treatment, and there is no known cure. There is, however, promising research currently underway. Your support can help advance this important work to find a cure for ALS.

“I get out of bed with a smile on my face because there is now optimism. It may prolong my life, it may save my life, but that’s something no one before me has had,”

The Angel Fund is special.

We are not a national charity – we are local. We have very low overhead and administrative costs. Our offices are located in the law firm of Nigro Pettipet and Lucas, courtesy of Directors Jan and Eugene Nigro. That means that The Angel Fund has no rent, no utility bills, no high-paid executives. Angel Fund President Rich Kennedy and the board members are not paid.

Why are they so passionate?

Because most have lived through the heartbreak of seeing their loved one live with ALS and lose their battle to this horrific disease. They have made a commitment to support Dr. Brown and his researchers until a cure is found, the goal of our original Angel, Ginny DelVecchio. They have a sense of urgency to find a treatment and cure by supporting the gene silencing therapy. We know the patients and their families – and the patients know us.

Our mission is to support ALS (Lou Gehrig's Disease) research and scientific investigations at the Cecil B. Day Laboratory by raising funds through events, campaigns, foundation grants and numerous other community outreach activities, to aid in finding a cause, treatment and cure for ALS.